Lots going on around my desk. 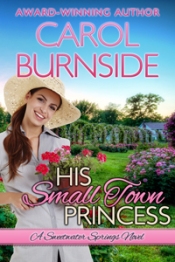 After a few minor hiccups during the uploading process, His Small Town Princess flew the nest in mid-September. I was so busy, I forgot to mention that here. (mea culpa!)  Reviews are starting to trickle in, but I need more to get the book noticed, so if you’re one of my readers who doesn’t mind leaving a thoughtful, honest review on Amazon, B&N and/or Goodreads, shoot me a note at carol@carolburnside.com.

However, I don’t have the print version available yet, only Mobi and ePub files. I’m currently working out glitches with the cover file.

Between releasing the ebook and print, I took a long weekend trip to Austin to see my son, then a week-long trip to Atlanta to attend a conference. And that’s where my critique partner and good friend, Susan Carlisle and I brainstormed new work.

I hope my readers enjoy the idea of this as much as I do, but here’s the concept for the new WIP (work in progress): a Christmas wedding in Sweetwater Springs with sightings of many of the characters seen in A Suitable Wife, Her Unexpected Family and His Small Town Princess. PLUS, I’m introducing Mac and Karla, the couple I’m going to write about in book 4!

LOL – Just then, I felt like I was mimicking one of those informercials where the announcer says, “but wait, that’s not all!” 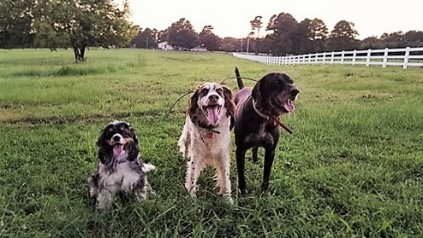 In between all that, I’m loving on my three furbabies who love to run in the field at sunset. 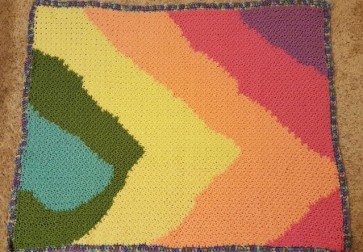 I’m also crocheting pretty stuff for identical twin great-nieces expected in early December, if not before. That border isn’t thrilling me though. Thinking I’ll probably frog it and do something else.  The colors in the variegated thread do match several colors in the blanket, but it doesn’t look cheerful like the blanket.

What do you think? 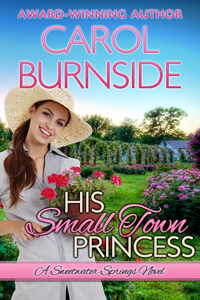 I finished the last of light edits on His Small Town Princess, the third book in my Sweetwater Springs series. J.T. and Cass’s story turned out to be a lovely end to the trio of Baxter sibling romances. If you’re looking for more info, SEPT. 16TH is RELEASE DAY, but it’s available for pre-order NOW!
You can read sample chapters here:
https://www.amazon.com/dp/B01LBR364C
and here: https://www.smashwords.com/books/view/661975
and a favorite scene of mine right here on my website:
https://carolburnside.com/…/his-small-town-princess-excerpt/

Also, if you feel so inclined, I would love it if you’d support my Thunderclap at
http://thndr.me/5xQV5H .
It’s easy, quick and painless, but helps me spread the word on book launch day. Just click on the link and agree to share my news on your social media outlets one time – on my book launch date 9/16/16. For all of you who do – THANK YOU, I really appreciate it!
My friends and readers are the best!!!

Add to your Goodreads shelf here:   His Small Town Princess 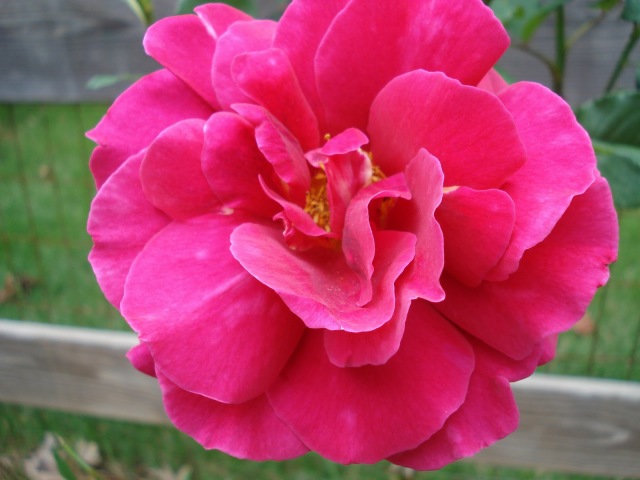 Gardening in fiction and real life

Luckily, we got several days of really warm Spring temps and sunshine, so I was able to plant flowers, herbs and tomatoes to my heart’s content. Three days, seven in-ground plants and some 32 pots later, I was able to clear the potting soil and tools away.

Perhaps it was my current WIP that put me in such a gardening mood. In His Small Town Princess (Book 3 of the Sweetwater Springs series), Cass opens a new business. Bing Gardens has three large greenhouses because she does things in a big way. No halfway measures when it comes to love either. Cass jumps into a relationship with a single dad (widower) before she realizes the impact her presence will have on their family dynamic.

Learn more about J.T. and Cass’s story here. See some of

my gardening handiwork below. 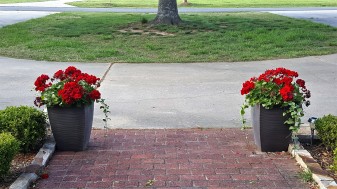 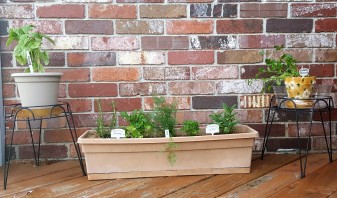 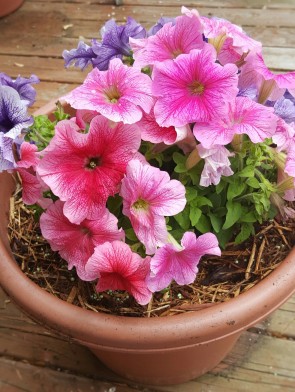 Pot of petunias – 1 of several 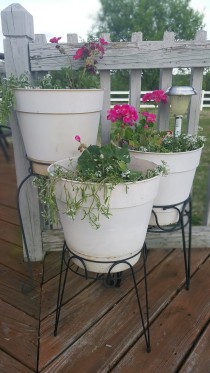 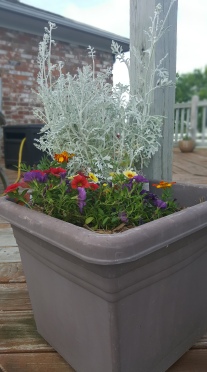 Save Your Readers 50% Off On KWL Titles–On Us!

If you’re a Kobo reader, this is the perfect sale for you! Save tons by using the promo code JAN1650. Enjoy e-books at 50% off!!! See details below.

The first month of 2016 is almost over, and what better way to celebrate than with a 50% off sale–fully supported by Kobo?

This special sale will start today (Jan. 28th) and ends on Sunday, January 31st and will be valid in Canada, United States, Australia, New Zealand, and the United Kingdom.

Customers will be able to redeem 50% off of any title published by KWL using the promo code JAN1650 an unlimited number of times starting today—so please, let your readers and fans know about this incredible opportunity to stack up on eBooks while they can!

See below the cut for the full rules & regulations of this sale. And as a reminder, this sale starts on Thursday, January 28th and runs until Sunday, January 31st and will not affect your royalties–this promotion is being fully supported by Kobo.

Posted in Everyday blather | Comments Off on Save Your Readers 50% Off On KWL Titles–On Us! 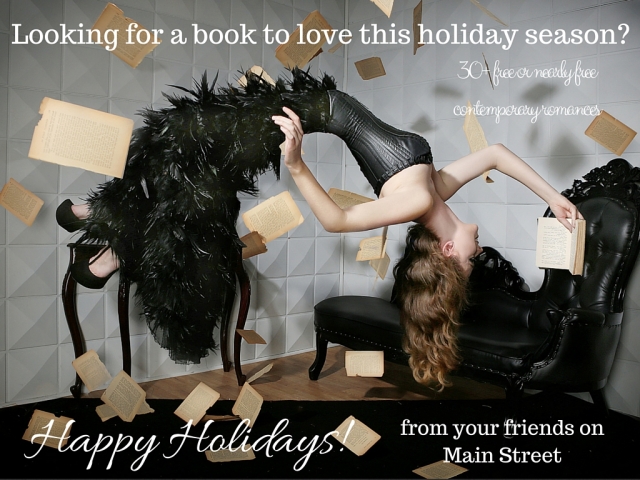 Enter my Goodreads Giveaway and WIN!

Starting today, I’m giving away several print copies of NOBODY’S BABY on Goodreads. Check out the giveaway and enter to win.  Good luck!

See the giveaway details
at Goodreads. 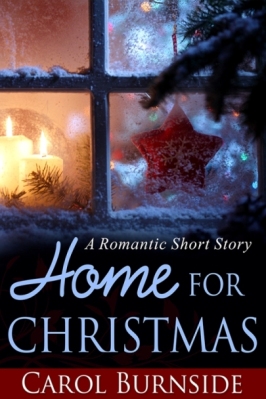 I’ve got a freebie for all of you who like romantic short stories or Christmas romance. But first, in the spirit of complete disclosure: This is a SHORT STORY. The file also contains sample chapters of some of my other works so you can get a good idea of my writing voice.

It’s a perfect coffee break read for any time. Get your (free!) copy now and tell all your friends to get theirs, too.

Currently #61 in the Amazon Top 100 Free (Holidays). Will you help me push it up the charts?

It’s a party for readers!!!

Blog Posts by tons of authors. Learn more about the authors, the stories behind the stories, the inspirations, the ideas. See the pretty covers, read the excerpts. Shop. Enjoy! Enter to win tons of PRIZES and a BIG GRAND PRIZE.

So, click the TRS banner above and I’ll see ya there, yeah?

Hubby and I are gardening again this year. Our first harvest this year was green beans. 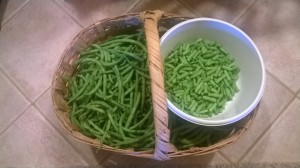 Lots of green beans. ( Those are 12″ tiles for basket size reference.) I processed them Monday for over four hours, but will they ever taste good this winter! 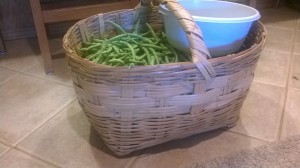