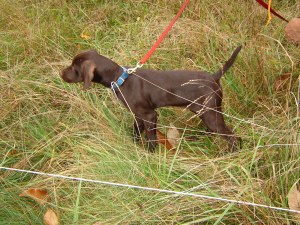 Can’t resist. This weekend we took all three dogs out for exercise and put the youngest two on birds so I could get some pictures.

The first picture is of Guinness at 14 weeks, exhibiting a nice point. In the second, it’s hard to see that he’s still holding a point, but I snapped it because you can see what is holding his attention.

And the third picture is of Murphy, whom you may have seen on this blog before. Murphy is now 4 years old and didn’t need a lead to keep
him in ch

eck. He knows better than to move in
on the bird. See how that beautiful tail is extended and not moving? He’s so intent on the bird that he didn’t take his eyes off it, though I was walking all around him taking pictures. He got a lot of ‘good boy’s’ for his efforts, just as Guinness did. Both had fun and were proud of themselves.

For those of you who might be concerned, the birds are tethered to a bush, but the dog isn’t allowed to get the bird. After the dog points the bird and is praised, the bird is released. 🙂

I hope you enjoy my handsome boys.

As an author of sizzling romance, Annie takes contemporary settings. and incorporates twists with sci-fi and paranormal elements.
View all posts by Annie Rayburn/Carol Burnside →
This entry was posted in Here at home, Pics and tagged pets. Bookmark the permalink.