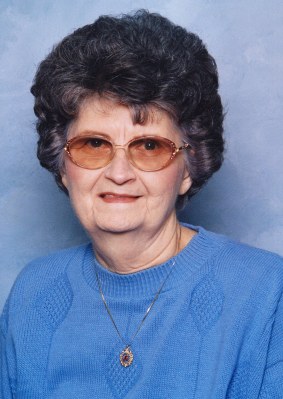 She was born on January 17, 1926 in Santo, Texas. A poor farmer’s daughter during the depression, she grew up in Santo and Lone Camp, Texas. In her youth, Minnie Ruth was a blue-ribbon spelling champ and avid volleyball player. She graduated high school and became a student in the Army Nursing Corp during World War II, caring for the GI’s in the Veterans Hospital of Temple, Texas until she married J.C. White in 1945. Shortly thereafter, they moved to Mineral Wells and raised a family.

Minnie Ruth was a devout Christian, a loving wife, mother, grandmother and friend to many. She loved working puzzles and traveling, visiting such far-flung places as Canada, Hawaii, Honduras and the middle east. Many of her trips were with the Senior Adults Ministries (SAM) group from the Little Rock First Church of the Nazarene.

During the course of her lifetime, she fished and hunted, performed household duties, kissed skinned knees and soothed fevered brows. A big part of her life involved volunteering in her local Nazarene Church in various capacities, including Sunday School teacher, Vacation Bible School director, district camp nurse and dorm counselor, church treasurer, missionary leader, custodian, board member and other positions as was needed. She was a talented and sought-after seamstress, an amateur hair-stylist, a newspaper columnist, playwright and director. Even with all those accomplishments she was proudest of her roles as wife and mother.

J.C. was the love of her life. After his death in 1967, Minnie Ruth and her daughters moved to Arkadelphia, Arkansas. Later, she moved to Austin, Texas, then to Little Rock, Arkansas, and finally Collinsville, Oklahoma near Tulsa.

Carol Burnside is an award-winning author of romance with serious sizzle. She blogs here, most always with a glass of sweet tea within arm's reach.
View all posts by Carol Burnside / Annie Rayburn →
This entry was posted in Pics and tagged loved ones, sorrow. Bookmark the permalink.