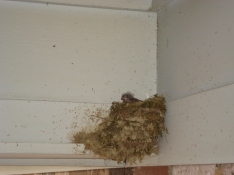 I’ve written in past years about the Phoebe pair who nest under the eave of my back porch. Well, they’re back again this year and have already had one nest of fluffy little babies. As you can see from a previous year’s photo, their nest is built on practically no ledge at all and sticks to the surrounding area.

About a week ago, we had several days of rain and their fledgling darlings were unceremoniously set free by a collapsing nest. One didn’t survive. 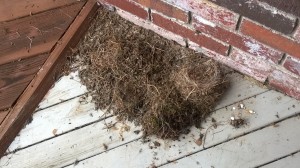 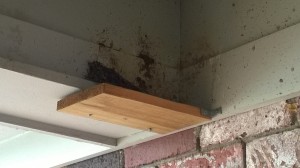 Last year the pair were quite, er, productive and had three clutches. So, Hubby and I discussed adding a little support for the nest, but another few days of drizzle and Hubby’s work taking him out of town delayed our plan.

I saw Mama Phoebe bringing in nesting material. She worked on another nest, away from the corner which gave it even less support (Hello…birdbrain!), only to have it fall as well. I got to work shoring up their area as best I could, giving her a platform on which to work.

I checked periodically, but didn’t see her up there again. Had she given up on her nesting spot?

Then, while letting the dogs out, I caught a flutter of wings and glanced up. That’s when the “Oh, Phoebe! Seriously?” came into play. I’d given her a better place to build, but she’d quickly established a new nest on our outdoor ceiling fan. Good thing I hadn’t switched it on!

Hubby and I are going to check for eggs this afternoon. If it’s still empty, we’re going to try a transfer over to her former location. Update to follow.

Carol Burnside is an award-winning author of romance with serious sizzle. She blogs here, most always with a glass of sweet tea within arm's reach.
View all posts by Carol Burnside / Annie Rayburn →
This entry was posted in Everyday blather, Here at home and tagged bird brain, nesting, Phoebe's, spring. Bookmark the permalink.