Okay, so my trip to San Antonio and the RWA conference began on Tuesday. I flew in, grabbed a shuttle and made it to the hotel and my room with no trouble. Whew! I wasn’t there long when my son called that he was on his way from Austin, where he works as a firefighter and EMT.  When he arrived we walked along the Riverwalk and stopped at the Esquire Tavern, a night spot the Marriott’s concierge recommended as being eclectic.

I was so excited to see Jason, I only got one quick picture before our food came. 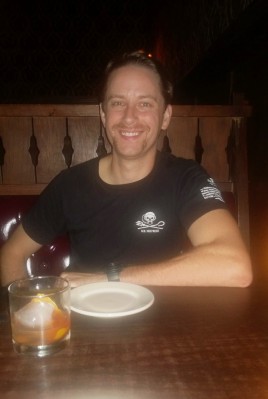 The Esquire Tavern was located in the upper story of an historic building and looked very Texas, inside and out. We had drinks at the bar while waiting for a table, but it didn’t take long. Our dining selections were (from their menu):

I have to say, my son’s enchiladas were better than the mole. Mine had a great flavor, but was a thigh/leg quarter and really difficult to eat. The waiter tried to convince me that the bright pink inside my chicken was a vein. Um, no. Cook it more. They did. I ate. Just when the darkness of the mole became a bit too intense, the candied almonds rescued my palate and made me want more.

Live music topped off the experience and we walked back. Ever the EMT, Jason roused a transient sleeping under a bridge because neither of us were sure he was breathing. He grunted an answer. We left him to his stupor and continued on to enjoy a small cup of gelato on the return trip along the riverwalk. Yum!

Tomorrow: Lunch at the Rainforest Cafe. Susan arrives! And a humongous book signing.

Carol Burnside is an award-winning author of romance with serious sizzle. She blogs here, most always with a glass of sweet tea within arm's reach.
View all posts by Carol Burnside / Annie Rayburn →
This entry was posted in Carol Burnside, Everyday blather, Going Places and tagged Esquire Tavern, Jason Burnside, riverwalk, RWA2014, San Antonio. Bookmark the permalink.
%d bloggers like this: