>Gah! I don’t want to even think about how long it’s been since I last blogged. I have discovered since then that planning a conference for upwards of 300 people is a huge undertaking requiring many, many hours of labor. Thankfully, the concensus seems to be that the 2007 Moonlight & Magnolias conference was successful and enjoyed by all. Yay! But enough about that. 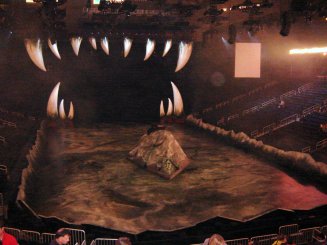 Today, I’m blogging about a great show that my DH, DD and I were fortunate enough to experience several weeks ago: Walking with Dinosaurs. An long-time friend of my son’s is in the show (one of the smaller dinos and occasionally Baby T-Rex) and treated us to the event. 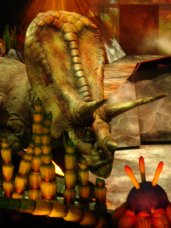 Held at Philips Arena in Atlanta, the show was very impressive and MASSIVE. Everything about Walking with Dinosaurs is larger than life, from the stage to the realistic and life-sized “characters.”

As you can see from the third picture taken backstage (yes, we got backstage passes, too – THANKS, JT!) the creatures are enormous. Can you see the man at the bottom in-between the dinosaurs? 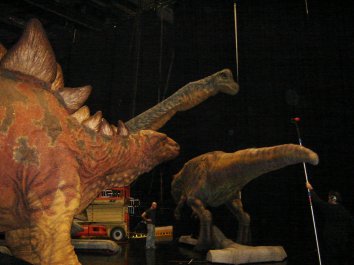 There were a LOT of grade-school age children attending with their parents, but the performance wasn’t geared only for them. There was plenty for them to enjoy, but the narration was a fabulous history lesson of the various dinosaur ages, the evolution of such creatures, and their eventual demise. If you think it was a dry and boring recitation, think again. The delivery was fun, active and humorous.

And T-Rex? That’s one B-I-G Mama. Just take a look at those teeth and compare them to the adult hand in the bottom of the picture. (Ugh. Looks like the dinos could have used a little dental hygiene!) The kids were scary-thrilled with her, especially after Baby T had enchanted them with his antics, gotten himself into trouble and she came to his rescue! 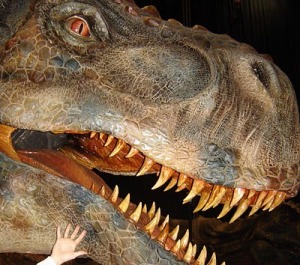 Fun time all around!

As an author of sizzling romance, Annie takes contemporary settings. and incorporates twists with sci-fi and paranormal elements.
View all posts by Annie Rayburn/Carol Burnside →
This entry was posted in Entertainment, Here at home. Bookmark the permalink.

2 Responses to >Walking with Dinosaurs