Big happenings on the homefront yesterday and today.

diligent in her efforts to keep her babies fed. I had no idea they were big enough to leave the nest, yet only one remained in it this morning. I took a flash pic of the little tyke and it startled and tried to fly! Crash-landed on my deck, sat there awhile, flutter-hopped its way over to the bistro set, tried unsuccessfully to fly to the bottom rung of the chairs. No go. Mama and Daddy Phoebe flew in, chirped encouragement from the chair backs then retreated a bit farther off.

I got a close-up before he tried flying again. Little dude (or dudette) doesn’t look before he leaps, went right into the pool. I fished

him out only to have him hop right out of my hand and back into the pool! Fished him out again, this time with a better

hold. Ended up putting him back into the nest where he occasionally perches on the edge, then retreats to safety and accepts the yummy worm and bug treats the parents bring in. Maybe tomorrow he’ll be strong enough to try again. 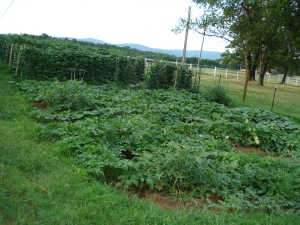 Garden Update: If you caught the last garden post with pics, you’ll be amazed to see its current state. Growth explosion, and along with it, more harvest. Yesterday’s

take? 12.1 pounds of cucumbers. I believe I see pickle preparation in my future.

Yesterday, I posted a short excerpt from Bittersweet Obsessions and would love to hear your comments/reactions to it, so feel free.

Carol Burnside is an award-winning author of "Sizzling romance with heart and humor." She almost always has a glass of sweet tea within arm's reach.
View all posts by Carol Burnside / Annie Rayburn →
This entry was posted in Books, Carol Burnside, Everyday blather, Here at home, Pics, Promo, Tues Tidbits and tagged baby bird, garden, pickles, rescue. Bookmark the permalink.